This is the recipe found on the package of Quaker Old Fashioned Rolled Oats. It is super basic and can easily be adapted to suit your tastes. Add whatever fruit you like, spice it up, or don’t; use milk, water, coconut water, almond milk…choice is yours.

So simple to make.  Get it this stuff going after you put the coffee on, go have a shower or make the bed or whatever while the cereal is cooking, come back to the kitchen and Voila! Breakfast is ready and so is the Coffee!

In medium saucepan bring liquid and salt to a boil.
Stir in 2 cups old fashioned rolled oats, apple, and cinnamon.
Reduce heat and simmer, uncovered, for 5 minutes, stirring occasionally.
Remove pan from heat.
If desired, cover anklet stand for 2 minutes before serving. This allows the oats to absorb any remaining liquid.

Sometimes I buy Sour Cream; I don’t know why I do this, no one here really likes it. I must have bought it because a recipe called for a bit of it leaving me with a whole lot to use up! That lil tub of sour cream kept was right at eye level in the fridge so each time I opened the fridge I would say to myself, “Right, I have to make something with that sour cream.” Well, I finally did something with it!  I turned to my friend, Betty Crocker, and she came through!You can find the original recipe at Betty Crocker . I keep not one, but two Betty Crocker cookbooks in my kitchen; it was fabulous being able to look at a printed recipe instead of having to scroll through the recipe as needed on my iPhone!  I did follow this recipe to the T, for a change…next time I might try adding some steamed apples? hmmmm!   A super moist Sour Cream Coffee Cake that was well received by all.

Preheat oven to 350F.
Grease bottom and side of Bundt pan or two Loaf Pans (9×5). Lightly dust with flour, tapping out excess.

Vanilla Drizzle Mix all ingredients until smooth and drizzling consistency.

Oh, and by all means, do have this for Breakfast!  I added a bit of Cottage Cheese and a handful of fresh Blueberries to make it a lil bit healthier!

All too often I find myself craving Cinnamon Rolls.  I have a few problems with that: all the kids are grown and gone so I would have to eat the entire batch on my own,  they are sinfully good therefore I would find it impossible to eat just one in a single sitting, and finally,  the cream cheese frosting is far too good to be true.

I am always looking for ways to incorporate that yummy Cinnamon Roll taste in a smaller, simpler recipe. I was delighted when this Cinnamon Roll Bread recipe from CenterCutCook came through my Facebook Feed over at Ay Sontespli’s Kitchen! If you love Cinnamon Rolls as much as I do I hope you will be as pleased with this quick bread recipe as I was!

In a small bowl combine Swirl Ingredients together: sugar, cinnamon and water; set aside.

In a large mixing bowl combine flour, baking powder, salt and sugar; make a well in the centre.
In a small mixing bowl or a large pyrex measuring cup combine egg, milk, vanilla  and yogurt or sour cream.
Add dry ingredients all at once into the well in the centre of the dry ingredients.
Stir just to combine.
Spoon half of the bread batter into the prepared loaf pan.
Spoon half of the swirl mixture over the batter.
Carefully spoon remaining bread batter over both,  spreading it evenly over the swirl mixture.
Top with remaining swirl mixture, then use a knife to make swirl designs to incorporate the cinnamon swirl into the bread batter.
Bake in preheated oven for 45 – 50 minutes or until a toothpick inserted in centre comes out clean.
Remove bread from oven and place on wire rack to cool.
Run small metal spatula around the edges of the cinnamon bread to loosen from pan; turn out onto wire rack to cool completely.
While bread is cooling, make the Glaze:
Combine icing sugar with scant Tablespoon of milk, adding a little more to achieve desired consistency.
When bread has cooled completely, drizzle glaze over the bread, allow to harden slightly before slicing to serve.
Store in an airtight container for up to 3 days.

These are relatively easy to make. A special treat for Sunday morn, with leftovers to see you through the week…but wait, if word gets out you are making these, you just might have a few visitors drop by for coffee!

In large mixing bowl, combine first amount of flour, sugar and rapid rise yeast; set aside.
Scald milk in small saucepan; remove from heat and add butter, stirring until the butter is melted.
Stir in warm water.
In small bowl beat eggs; *temper with slightly cooled, scalded milk mixture.
Gradually add tempered eggs to the remaining scalded milk mixture.
Pour the liquid ingredients into the flour, yeast and sugar.
Stir vigorously for 2 minutes.
Add a cup of flour and the salt; stir.
Add flour, a cup at a time until a soft dough is formed; you may have to “stir” last stages of flour in with your hands.
Turn dough out onto lightly floured surface and knead for 8 minutes, until smooth and elastic.
Cover with a clean tea towel and let rest for 10 minutes.

Spray two 9×13 pans with Vegetable Oil spray; set aside.
While dough is resting, prepare the

Prepare the Rolls:
On lightly floured surface, knead dough a few times then divide into two equal portions.
Cover portion you are not working with.
With other portion, roll out into a 15″x8″ rectangle.
Sprinkle half of the filling mixture to within 1/4″ of the edges of the rectangle.
Roll up tightly, beginning at 15″ side.
Pinch to seal edge. 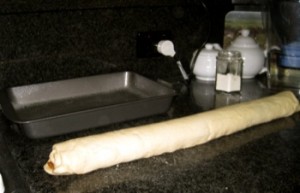 Getting set to cut the roll into individual rolls

Cut into 12 slices with a sharp knife.
Place cut side down in prepared pan.
Repeat with second portion of dough.
Cover and let rise for at least an hour and a half. 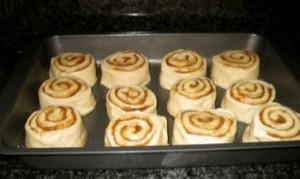 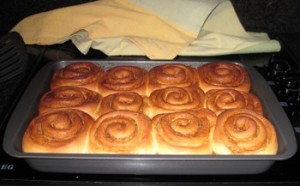 While still warm, but not hot, cover with Cream Cheese Frosting.

Cream Cheese Frosting:
In medium mixing bowl cream together the softened cream cheese and  butter.
Stir in a cup of icing sugar and vanilla until well incorporated.
Add remaining icing sugar a little at a time and stirring well after each addition.
If the icing is too thick, thin with a little milk. 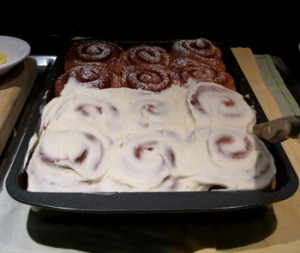 Let’s dress these babies up…or not; your call.

** The Cream Cheese Frosting recipe I have posted is one I have used for yonks! I don’t know where it came from and I don’t actually measure the ingredients. I think the measures I have listed are pretty accurate for a lovely, creamy, delectable cream cheese frosting.

Autumn, glorious Autumn! I am so thankful we have four distinct Seasons. I have to say that Autumn is one of my favourite Seasons! I love the colours, I love the crunch of leaves underfoot, I love the crisp early mornings, I love the sun on a cold day but above all, I love my fireplace! I love being able to curl up in front of the fire with a good book and some quiet jazz music in the background.

Oh, I like the food too: apples, pears, plums, pumpkin, hearty soups and stews, substantial breads, hot coffee, to name a few. This recipe came through my FB feed the other day; since I had a few Granny Smith apples aging day by day….why do I buy these??? No one likes to eat them! When I was a kid we used to eat them with a dash of salt on each bite! Probably not all that healthy, but Yum! Anyway, they are such a brilliant Green that I like to have them in the fruit bowl. Granny Smiths are the perfect apple for this Pecan Apple Bread. Now in the original recipe the batter was baked in a loaf pan; I just think taking a loaf bread batter, throwing it into a bundt pan, dressing it up super pretty is so much more fun! That and it doesn’t take as long to bake. Anyway, you make your Apple Pecan Coffee Cake they way you want just so long as you DO make it!

Oh, hey, this recipe is lacking butter! I thought that was weird and maybe it was simply forgotten in the transfer to the internet? Happens. I tried to track the recipe back to an original site to no avail. Shrugged my shoulders and thought I would try it as listed before I changed it…didn’t have to! It came out perfectly! One little change that I made and will do again next time was to include a streusel topping…except it ended up on the bottom. Yes, I knew it would be on the bottom! I thought it would add some nice texture and I was right. Next time though I will put half the batter in the pan, some streusel mix then the rest of the batter and finishing off with streusel mix. 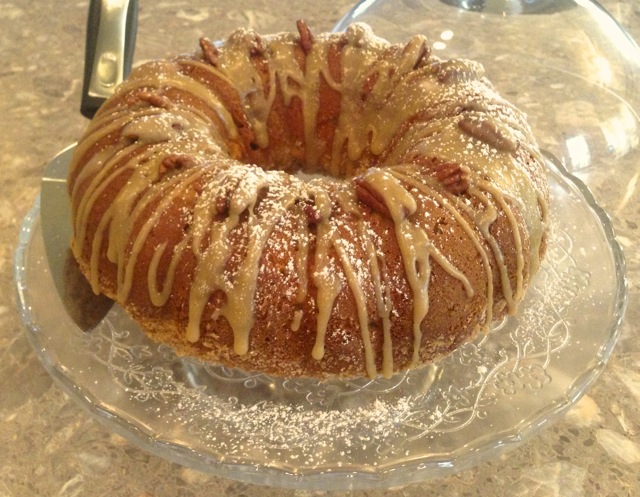 Preheat oven to 350F.
Lightly spray a bundt pan with vegetable oil and swirl about 1/4 cup of flour around the greased pan; tap out excess flour.
Peel and chop apples; set aside.
Combine brown sugar, sour cream, eggs and vanilla in a large mixing bowl; beat on low speed until well blended.
Add flour, baking powder, baking soda, Apple Pie Spice, salt; stir well.
Fold in apples and 3/4 of the pecans.
Turn batter out into prepared bundt pan.
or Spoon half the batter into prepared pan, sprinkle with half the streusel, spoon in remaining    batter then top with remaining streusel.
Bake in preheated 350F. oven for 35 – 40 minutes or until pick inserted in centre comes out clean.
Remove from oven, run a small metal spatula around to loosen edges then cool, in pan, on wire rack for 20 minutes.
Turn out onto wire rack to cool completely.

Drizzle with Brown Sugar Drizzle:
In a small saucepan, over medium heat combine brown sugar and butter.
Stirring constantly, bring to a boil, reduce heat to low and allow to simmer for a minute or until it thickens.
Remove from heat and drizzle over cooled coffee cake.