Late last year I came across Cinnamon Roll Pancakes at Recipe girl and immediately fell in love with the idea of morphing cinnamon rolls and pancakes together to create a super special brunch treat! I usually make a triple batch! The leftover ones are just as yummy as the fresh off the griddle ones. I would even go so far as to say they are better because the flavours have had a chance to meld and the brown sugar swirl has hardened as it cooled. Yummers!

Yes, they are a bit of work to prepare but well worth the effort. So brew yourself a cup of coffee, gather your ingredients and do it! Start by preparing the Brown Sugar/Cinnamon mixture, make the Cream Cheese Frosting and finally the Pancake Batter. Now I suppose you could cheat and use store bought Pancake mix, but why would you want to do that when whipping up Pancake Batter is so easy to do?

Brown Sugar Cinnamon Mixture:
Melt butter in small mixing bowl; add brown sugar and cinnamon and stir well to combine.
Pour the mixture into a Piping Bag or a small Ziploc Freezer Bag. (I fasten the end of my piping bag with a small clip, prop the bag in a drinking glass, fill the bag then put the whole thing into the fridge to bring the mixture back to a semi solid paste)

Cream Cheese Glaze:
In small mixing bowl cream together the softened butter and cream cheese until no lumps remain.
Add icing sugar and vanilla, stirring well.
Spoon the Cream Cheese frosting into a second Piping Bag or small Ziploc Freezer Bag. (Again, I secure the tip while I load the piping bag and leave it sit in another drinking glass until I am ready to use it)

Pancake Batter:
In medium mixing bowl combine flour, baking powder, salt and sugar; make a well in the centre.
In large pyrex measuring cup, melt butter; add 1 cup of the milk then stir in eggs, one at a time, stirring well after each addition.
Pour the egg mixture into the dry ingredients, add another 1 1/2 cups milk along with the vanilla and whisk together until well combined; add enough milk to right consistency.  A few lumps may remain.

Now we are ready to cook the Pancakes!

Heat a large non stick griddle to 350F. and lightly spray with vegetable oil spray.
Scoop about 1/3 cup of batter for each pancake onto the hot griddle, lightly spreading each portion evenly.
When pancakes begin to bubble pipe the Brown Sugar/Cinnamon mixture onto each pancake and continue cooking pancakes until the bubbles begin to pop.
Carefully slide a wide spatula underneath the pancake and flip over; cook for another 2 – 3 minutes, until golden.
Flip the pancakes onto a plate.
Serve each pancake with a drizzle of cream cheese frosting.

Recipe girl tells you to wipe out the pan between batches but I don’t do that. I did it the first time I tried the recipe and found it just made a mess so I just scoop more batter onto the griddle after I remove a batch. The griddle does get messing, as does the spatula but both clean up very easily. Once finished cooking I pour a enough water to coat the griddle, stick the spatula in HOT water to melt the sugar off. Works like a charm every time! Trust me, if this did not clean up nicely, I would not make them as often as I do.

Please do visit Recipe girl for the original recipe. She has also listed a couple of delicious variations. I definitely want to try the Gingerbread-Cinnamon Roll Pancakes around Christmas time.

I read on my FB page today that it was Black Forest Cake day! With my husband on the Atkins Diet I thought I might be able to muck around with a basic MIM (Muffin in a Minute) recipe to create a low carb Black Forest “Cake”.  It was a hit! Black Forest Cake and no guilt! Who knew?

I used a whole can of Unsweetened Pitted Cherries because I tripled the MIM recipe to make three individual Black Forest “Cakes” for the family. If I were to make a single one, I would just cook the cherries up and store it in the fridge to have decadent Black Forest Muffins for Breakfast!
The recipe listed below is for a single MIM but the Cherry Filling is for 4 serves.

Start by making a Carob MIM.

Lightly spray a 4″ ramekin with vegetable oil spray; set aside.
In pyrex measuring cup melt the butter; stir in egg, splash of cherry juice and rum flavouring.
Add dry ingredients and stir until no lumps remain.
Stir in chopped cherries.
Pour batter into prepared ramekin.
Microwave on HIGH for 1 -2 minutes depending on your microwave oven (I had to go 1 min 30sec )
Run a small metal spatula around the rim to loosen. Let sit in the ramekin for 5 minutes before turning out to cool completely.
While the “cake” is cooling prepare the Cherry Filling.
Drain the liquid from the can of cherries into a small saucepan.
Add 2 teaspoons of Splenda and a splash of rum flavouring; bring to a boil and continue boiling until the mixture has reduced to slightly syrupy texture.
Add the cherries, mash with a fork or potato masher and continue cooking until it has reduced to pie filling consistency; set aside to cool.

To build the Black Forest “Cakes”
Split a cooled cake, top with a layer of cherry filling then a dollop of whipped cream.
Put the top layer on, pipe a border around the top edge, fill the centre with cherry filling and dust with ground carob chips.

With Luke on the Atkins Diet and me being the Baking Fanatic that I am we often find ourselves craving something “sweet”. (Yes, good wife that I am, I have given up everything that he has given up in order to support his efforts! And I won’t complain because admittedly I can stand to lose a few pounds too.) I joined this FB group called Your Lighter Side where Bacon is often featured 😉 I love it because it is a community of low carbers and they have tonnes of low carb ideas and share them freely! That said, I would love to credit the owner/creator of the Muffin in a Minute but when I google it I come up with a gazillion hits so I have no idea who to credit O.o

If you are watching your weight but crave something sweet, you simply must try this! It will hit the spot and kill those sugar cravings dead in their tracks!

How I brought it all together:
Put measuring cup on scale; tare. Add butter to 0.15 ounce; melt butter in microwave.
Add egg and beat slightly.
Add remaining ingredients, stirring until fully incorporated.
Pour into 4″ Ramekin which has been lightly butter or sprayed with vegetable oil spray.
Microwave on High for 1 minute or more, depending on your microwave. (I have a not so great microwave oven and a minute was all it took…)

Now I have not made meatloaf in years and I was really doubtful about whether or not I could pull it off using Yves Just Like Ground Round but, lo and behold, it worked!

I suppose my husband might enjoy REAL meatloaf made with ground beef…perhaps I will give it a go sometime in the future though I must admit out of all the meats there are to cook? Ground beef is my least favourite to cook!

Where did I get the recipe? I googled Low Carb Mexican Meatloaf and one of the top hits was http://recipes.sparkpeople.com/recipe-detail.asp?recipe=1221493. Of course there would be substitutions and no, I didn’t exactly follow the recipe but I was happy with the results.

In a large mixing bowl combine ground beef (Yves JLGR) eggs, spices, sour cream (yogurt),  mashed black beans and half of the cheese.
Evenly spread half of the mixture into the prepared loaf pan.
Sprinkle with a bit of cheese and 1/2 cup salsa.
Pour remaining beef mixture on top, spread evenly and top with remaining salsa, sprinkle with black olives and remaining cheese. 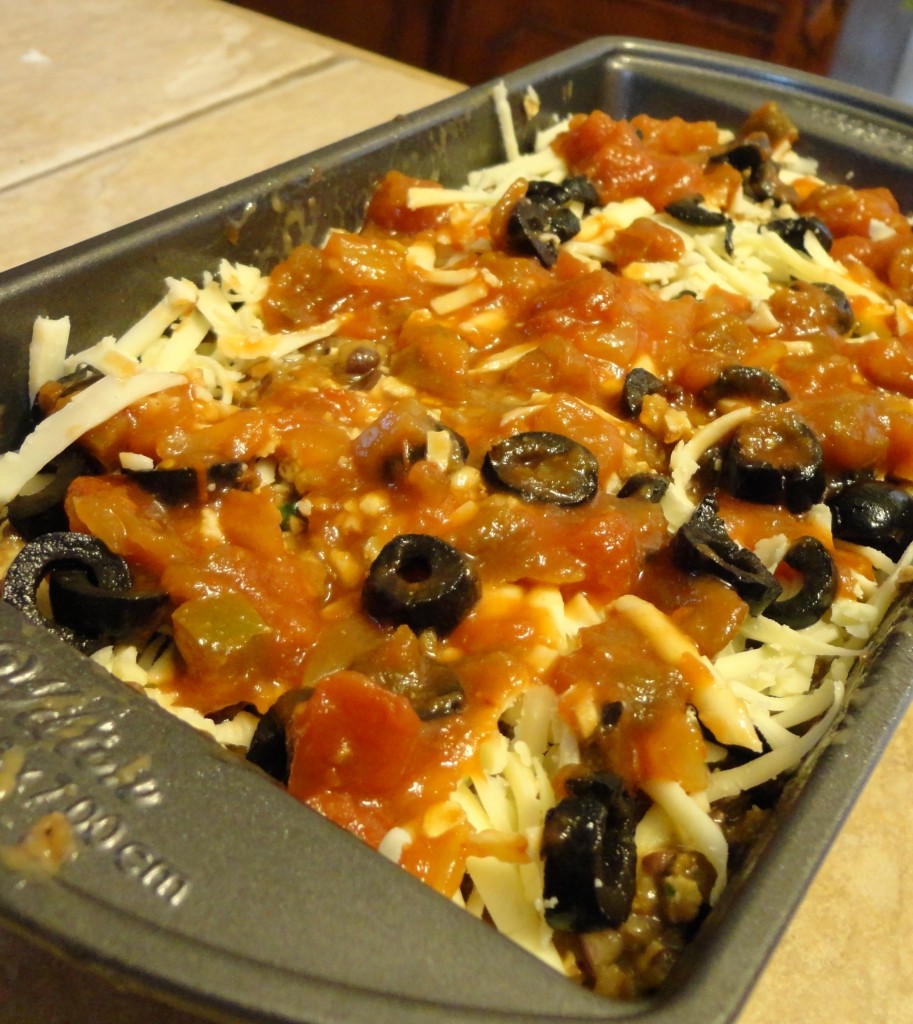 I am always looking for new, interesting ways to cook chicken for my husband. This recipe got his hearty approval. I found this  flipping through “Atkins The Complete Cookbook; Lose Weight with Hundreds of Low Carb Dishes”  searching out all the Induction Phase recipes.

In a large glass baking dish, mix vinegar, garlic, bay leaf, peppercorns and soy sauce; add chicken and toss to coat.
Cover with plastic wrap and marinate in the refrigerator 1 hour.
* I had bought a family pack of Chicken Breasts which I divided into two large freezer
Ziplock bags; I simply added the marinade to a defrosted bag of chicken pieces.

Transfer chicken and its marinade to a large saucepan.
Add water and heat to boiling, over high heat.
Cover, reduce heat to low, and simmer 20 minutes.
With tongs, transfer chicken to a plate to cool.
Bring cooking liquid to a boil and continue boiling for about 10 minutes, until it is reduced to 1 cup.
Let sauce cool and strain into a small saucepan; skim off fat and reheat.
Pat chicken dry with paper towel.
In a large skillet, heat oil over high heat until very hot.
Brown chicken, in batches, about 2 minutes per side.
Transfer to a deep platter and pour hot sauce over chicken.
Snip green onions over top for garnish.